DONALD TRUMP ON THE ROAD TO IMPEACHMENT

IS DONALD TRUMP ON THE ROAD TO IMPEACHMENT? 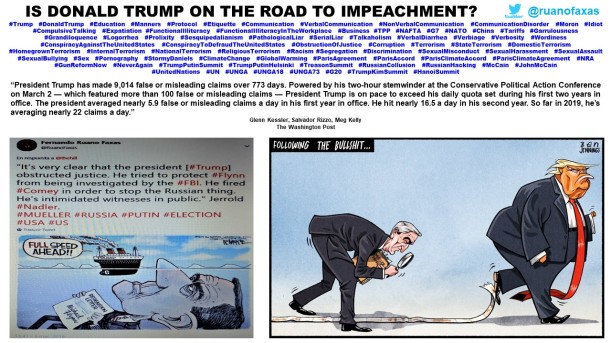 "It’s very clear that the president [#Trump] obstructed justice. He tried to protect #Flynn from being investigated by the #FBI. He fired #Comey in order to stop the Russian thing. He's intimidated witnesses in public." Jerrold #Nadler.#MUELLER #RUSSIA #PUTIN #ELECTION #USA #US pic.twitter.com/BB2FDNzSLm

"An array of formerly self-respecting adults inexplicably have forfeited their principles and dignity for the president,as #Cohen did. A small sample might include #Pence,Kanye West,Lindsey #Graham,#Melania Trump,Matt #Gaetz, David #Weissman."#USA #TRUMP #ELECTION #RUSSIA #PUTIN pic.twitter.com/TvoGKlriXI

"#Netanyahu will be indicted on #corruption charges, pending a final hearing […] in a major blow to the Israeli leader as he seeks a fifth term in office"https://t.co/41cYgf3aLy#ISRAEL #TRUMP #IMPEACHMENT #COHEN #RUSSIA #RUSIA #PUTIN #USA #ELECTION #MUELLER #FBI #TrumpFail

"Shame on you, Mr. Jordan [Jim @Jim_Jordan].That is not what I said," #Cohen said,stating that he "took responsibility" for his mistakes and is remorseful.
"We have some absolute warriors, Jim Jordan, Mark Meadows, Matt Gaetz, Ron DeSantis" #Trumphttps://t.co/vZpplvQjan#MUELLER

Rep. Paul #Gosar @RepGosar: "You're a pathological liar. You don't know truth from falsehood. So again–"
Michael #Cohen : "Sorry–are you referring to me or the President [#Trump]?"
Gosar: "Hey! This is my time! When I ask you a question, I'll ask for an answer."
Cohen: "Sure." pic.twitter.com/AG1ifSSQkm

"#Trump declares himself brilliant,but directed me to threaten his high school,his colleges and the college board to never release his grades. Barack #Obama a terrible student and criticized him for not releasing his grades" Michael #Cohen.#USA #ELECTION #LEADERSHIP #MANAGEMENT pic.twitter.com/uDW7rjJ6ID

“When Mr. #Trump turned around early in the campaign and said, 'I can shoot somebody on Fifth Avenue and get away with it,' I want to be very clear: he’s not joking. He’s telling you the truth. You don’t know him. I do." Michael #Cohenhttps://t.co/unZMj6ovfI#TERRORISM #ELECTION 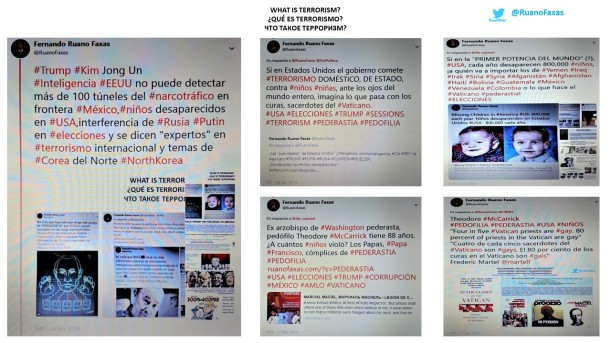 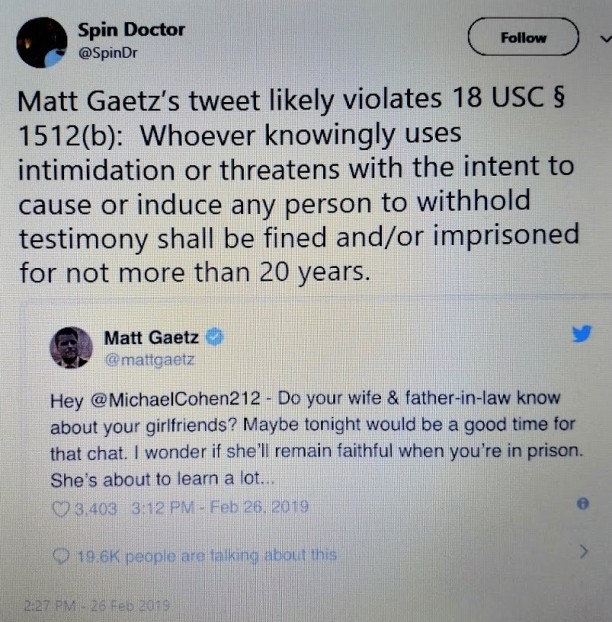 "[Matt] #Gaetz isn't even on the Oversight Committee, so it's just like he's trying to get in on the game, and sort of, you know, please 'Daddy #Trump.'"https://t.co/SWEsMDXsgq
Michael #Cohen #Mueller #FBI #USA #Election #Russia #Putin #StormyDaniels #KarenMcDougal #GOP #MAGA

"With the partisan stakes so high, Representative Matt #Gaetz,a firebrand Republican from #Florida,went after Mr. #Cohen pre-emptively with a personal attack that some Democrats said amounted to witness intimidation"https://t.co/dBz0IvanyO#Russia #Mueller #Putin #Trump #Election

"I’ve got a pretty nice weekend of investigating Matt #Gaetz planned. We’re going through every doc he’s ever filed in politics ever. We’re analyzing every donor he’s ever had. And looking at everything he’s ever done" Scott Dworkinhttps://t.co/tjXQ4QpkSj#COHEN #TRUMP #ELECTION pic.twitter.com/9gwni01QpT 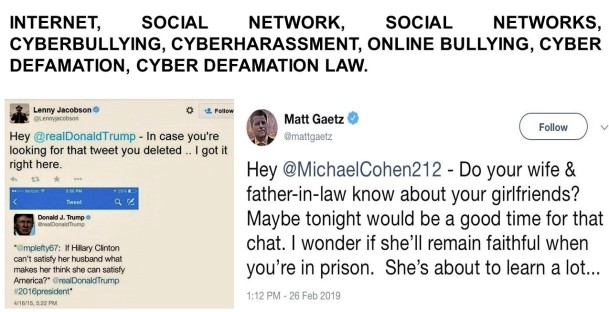 "Alva Johnson said #Trump grabbed her hand and leaned in to kiss her on the lips as he exited an RV outside a rally in Tampa. In a statement, #WhiteHouse press secretary Sarah Sanders dismissed the allegation as 'absurd on its face.'"#USA #ELECTION Stormy Daniels #Melania #MeToo pic.twitter.com/06D8CJRfhT

"Colorado governor [Jared Polis] will sign bill aimed at bypassing Electoral College. Polis called the Electoral College an 'undemocratic relic' of the nation’s past, one he wants to see relegated to the dustbin of history"#ELECTION #USA #TRUMP #CLINTON #PUTIN #RUSSIA #GOP #MAGA pic.twitter.com/XPSnVMS8WC 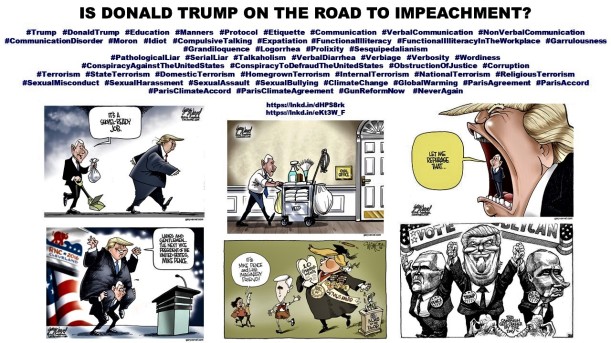 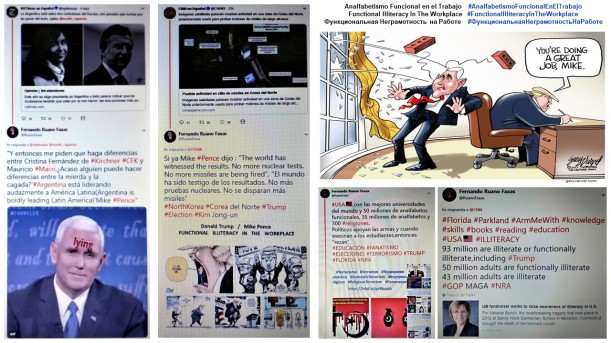 “We are with you [Juan #Guaidó] 100 percent.” Mike #Pence, Vice President of the United States.

"I will continue fighting to defeat the president's agenda of socialism" Michele #Bachmann.
"The days of #socialism and #communism are numbered, not only in #Venezuela, but in #Nicaragua and #Cuba as well. #America will never be a #socialist country" Donald #Trump.#ELECTION #USA pic.twitter.com/qbxRnB1HPc 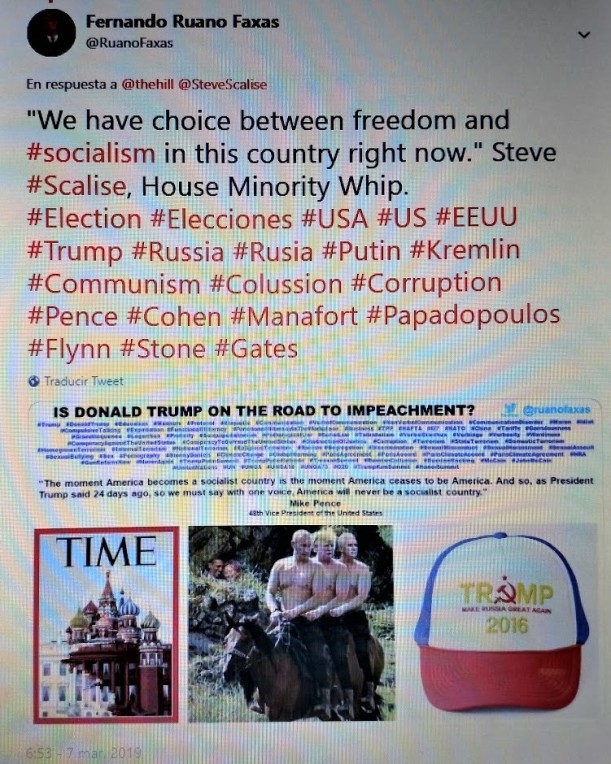 "He (George W. #Bush) and I had our differences, but no one ever questioned his #patriotism. The vast majority of the people know something's wrong with #Trump." Harry Reid.#USA #ELECTION #WhiteHouse #SOCIALISM #GOP #MAGA #PUTIN #RUSSIA #VENEZUELA #CUBA #NICARAGUA #MUELLER #FBI pic.twitter.com/q4a4x4L3yX

"President #Putin says #Russia will respond to any American deployment of short or intermediate-range nuclear weapons in #Europe by targeting not only the countries where they are stationed, but the #US itself."#USA #EEUU #ELECTION #TERRORISM #TRUMP #GOP #MAGA #MUELLER #FBI #CIA pic.twitter.com/vIsTGh8eAM

"He's [#Trump] scared. He's got something to hide. Because if he had nothing to hide, he'd just shrug his shoulders and let these investigations go forward. He's afraid of them." Chuck #Schumerhttps://t.co/e0anHcRm2ohttps://t.co/z3xQN967gb#USA #ELECTION #MUELLER #RUSSIA #PUTIN

"Alec #Baldwin [@ABFalecbaldwin] hit back at #Trump’s rage-tweeting against '#SaturdayNightLive,' asking whether his attacks constitute 'a threat to my safety and that of my family.'"#USA #JOURNALISM #GOP #MAGA DOMESTIC, STATE #TERRORISM #ELECTION #RUSSIA #PUTIN #MUELLER #FBI pic.twitter.com/K8p626GYJo

"Coalition of 16 US states sues #Trump administration over decision to declare emergency over border #wall.'We're suing President Trump to stop him from unilaterally robbing taxpayer funds lawfully set aside by #Congress for the people of our states'"#MEXICO #MURO #ELECTION #USA pic.twitter.com/knL5xYqykp

"Ocasio-Cortez @AOC calls out #Trump in a 5-minute corruption 'lightning round game,' shedding light on the US financial system and political #corruption"
Is now the most viewed #twitter video of any politician.https://t.co/zmzOXNqDh5#ELECTION #USA #RUSSIA #PUTIN #MUELLER #FBI

"The passage that #Pelosi has cited as her favorite goes like this: 'To minister to the needs of #God's creation is an act of worship. To ignore those needs is to dishonor the God who made us.' The passage simply doesn’t exist"#USA #RELIGIONS #BIBLE #EDUCATION #ILLITERACY #TRUMP pic.twitter.com/wxc029leHU

#Trump: "[#ISIS] used the internet brilliantly but now it's not so brilliant & now the people on the #internet that used to look up to them & say how wonderful and brilliant they are not thinking of them as being so brilliant bc they've been decimated."#TERRORISM #USA #ELECTION pic.twitter.com/CNCt4wr3mE

"If there is going to be peace and legislation, there cannot be war and investigation" #Trump
"He’s scared. He’s got something to hide. Because if he had nothing to hide, he’d just shrug his shoulders and let these investigations go forward. He’s afraid of them" #Schumer#SOTU pic.twitter.com/mV36AvW6Q7

"Another cartoonist loses his job. This does not bode well for the future of newspaper cartooning. Steve Benson,Nick Anderson,Rob Rogers,Charlie Daniel,Gary Varvel. This is a foreshadowing of more to come."#JOURNALISM #PERIODISMO #USA #TRUMP #ELECTION #GOP #MAGA #MUELLER #RUSSIA pic.twitter.com/waiWLy6Mm8

"President #Trump Posts Altered Photos to Facebook and Instagram That Make Him Look Thinner. Fake photos. Has been somewhat sensitive about the size of his hands. Trump’s fingers have been made slightly longer"https://t.co/191HYwhBhw#ELECTION #PHOTOSHOP #RUSSIA #PUTIN #MUELLER

"He [#Trump] is taller than me, he's like 6' 2, which is why I don't understand why his #hands are the size of someone who is 5' 2. Have you seen his hands? And you know what they say about men with small hands. You can't trust them" Marco #Rubio.#ELECTION #MANOS #RUSSIA #MUELLER pic.twitter.com/3ocechYcy0

"#Trump finds a cure for his small-#hands problem. #Photoshop"https://t.co/tPqU0jnxwn
"He is taller than me. Have you seen his hands? And you know what they say about men with small hands. You can't trust them" Marco #Rubio#USA #ELECTION #GOP #RUSSIA #PUTIN #MUELLER #WALL #MURO

"We need a wall of every single citizen in the United States, a good #wall, that keeps the #WhiteHouse away from the #Mueller investigation. And we have every single right to know what the results of that investigation is" Jane #Fonda.#USA #ELECTION #GOP #TRUMP #RUSSIA #PUTIN pic.twitter.com/VXthO8lTiB

"#Giuliani just contradicted nearly all the #Trump team’s past collusion denials. On Wednesday night appeared to grant the possibility that members of Trump’s campaign did, in fact, collude with the Russians during the 2016 presidential #election campaign"#RUSSIA #PUTIN #MUELLER pic.twitter.com/yfLLKeP7i6

"#Trump is fraying nerves inside the #Pentagon. In private conversations over the past month, more than a dozen key military officers, enlisted personnel and senior civilians have expressed worry and concern about Trump's presidency"#ELECTION #USA #RUSSIA #PUTIN #MUELLER #FBI pic.twitter.com/kMDVnQhXx6

"About 32,000 DHS employees, or about 13%, are not working and not getting paid as the partial government #shutdown reaches 25 days with no end in sight. The empty offices include strategic planning, oversight functions, research and employment verification"#USA #ELECTION #TRUMP pic.twitter.com/be0qWPKZ3X

"The partial #US government shutdown will cost #Delta Air Lines about $25 million in revenue this month. Is the longest ever and has left some 800,000 government employees furloughed or working without pay"#USA #EEUU #Election #Trump #Terrorism #Russia #Putin #Mexico #Wall #Muro pic.twitter.com/TAke3gNFX6

"president being asked by Jeanine #Pirro of #FoxNews on Saturday evening whether he had ever worked for the #Russians."
"the most insulting thing I’ve ever been asked." Donald #Trump.#USA #US #EEUU #ELECTION #RUSSIA #PUTIN #MUELLER #FBI #CIA #GOP #MAGAhttps://t.co/g1AEiUbZVc pic.twitter.com/h1tTEdwPuV

"Donald Trump: The #Russia File. Americans deserve to know what the president and Vladimir #Putin are talking about."
Would you sell your country to the Russians?
CONSPIRACY AGAINST THE UNITED STATES
CONSPIRACY TO DEFRAUD THE UNITED STATES
OBSTRUCTION OF JUSTICE#USA #ELECTION pic.twitter.com/qrio2iLICP

"If, as the #WhiteHouse says, #Trump has no compromised relationship with #Russia, why does he go out of his way to hide his interactions with #Putin?"https://t.co/b6GTDKpzJ0#USA #US #EEUU #ELECTION #MUELLER #FBI #CIA #COMEY #MANAFORT #TrumpJr #GOP #MAGA #MEXICO #MURO #WALL pic.twitter.com/PBijTmsvpD

"#Schumer describes a meeting he just had with President #Trump: Unfortunately, the president just got up and walked out. He asked Speaker #Pelosi, 'Will you agree to my #wall?' She said no. And he just got up and said, 'Then we have nothing to discuss,' and he just walked out" pic.twitter.com/bPqm5Cq0rm

"How pathetic is his argument if he [#Trump] doesn't even have confidence that he can prevail in a negotiation if he has to shut down government to strengthen his hand?" Nancy #Pelosi.#USA #ELECTION #MEXICO #WALL #MURO #PUTIN #RUSSIA #MUELLER #FBI #CIA #GOP #MAGA #GOPshutdown pic.twitter.com/bHeOglvN9N